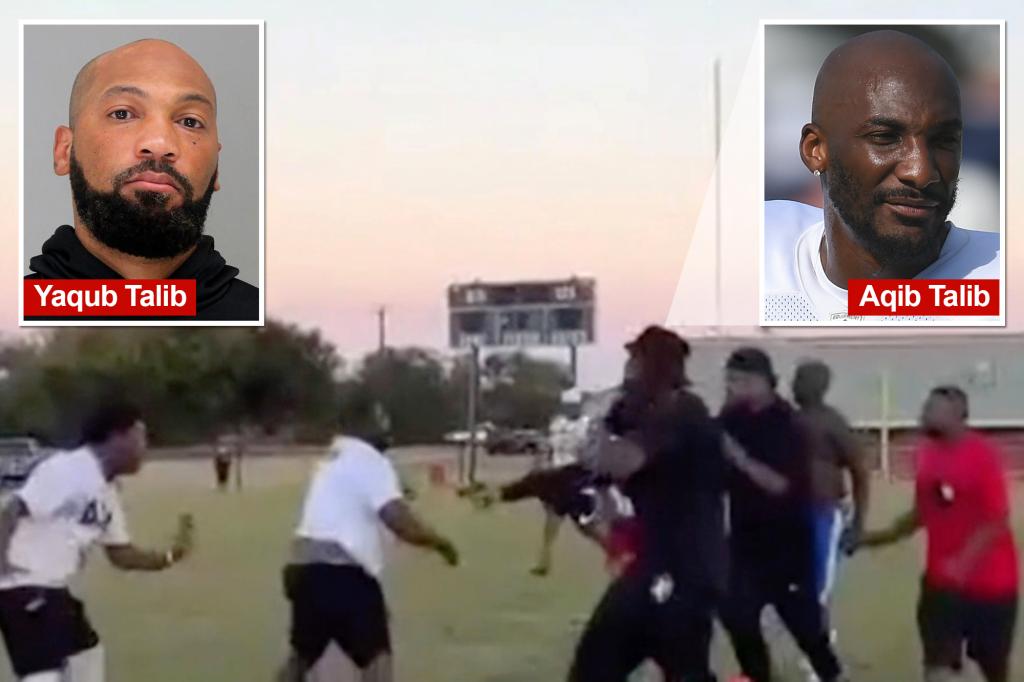 Aqib Talib was right in the middle of a fight at the youth football game in Texas in which a coach was fatally shot, new video shows, with his brother Yaqub turning himself in after a warrant was issued for his arrest.

On Tuesday, WFAA TV in Dallas published a video that showed the moments before coach Mike Hickmon was killed, and reported that witnesses identified Aqib Talib in the footage as wearing a hat and white sneakers at Lancaster Community Park in southeast Dallas County, where the incident took place.

Multiple witnesses said Talib was the one who started the brawl due to him being upset about referees, according to WFAA — which reported Talib, 36, and his brother Yaqub Salik Talib, 39, jointly coach a youth team for the North Dallas United Bobcats.

On Monday, Yaqub turned himself in after a murder warrant was issued for his arrest over Saturday’s fatal shooting.

Heath Mays, a coach on the opposing football team, told WFAA that Aqib “ran across the field and ran over on our sideline and got in the ref’s face.

“He threw the first punch, and you see Mike [Hickmon] trying to defend himself.”

Police said in an arrest affidavit the incident began over an argument about the score of the game.

“The altercation became physical, leading to the suspect pulling out a firearm and shooting Mr. Hickmon multiple times,” the Lancaster Police Department said in a statement. “At this time no other injuries have been reported. After the shooting, the suspect fled the scene in an unidentified vehicle, taking the firearm with him.”

Hickmon was the coach of the DEA Dragons.

Dragons president Mike Freeman said Saturday’s fatal dispute began when Hickmon went to pick up a football, but someone kicked it away.

Aqib Talib’s lawyer, Frank Perez, issued a statement saying his client “was present when this unfortunate incident occurred and is very distraught and devastated over this terrible loss of life. He would like to convey his condolences to the family of the victim and to everyone who witnessed this unfortunate tragedy.”

Yaqub is charged with murder, according to WFAA, while police continue to investigate if any other charges will be filed.

Aqib Talib was shot at a strip club in 2016 when he was a member of the Broncos.