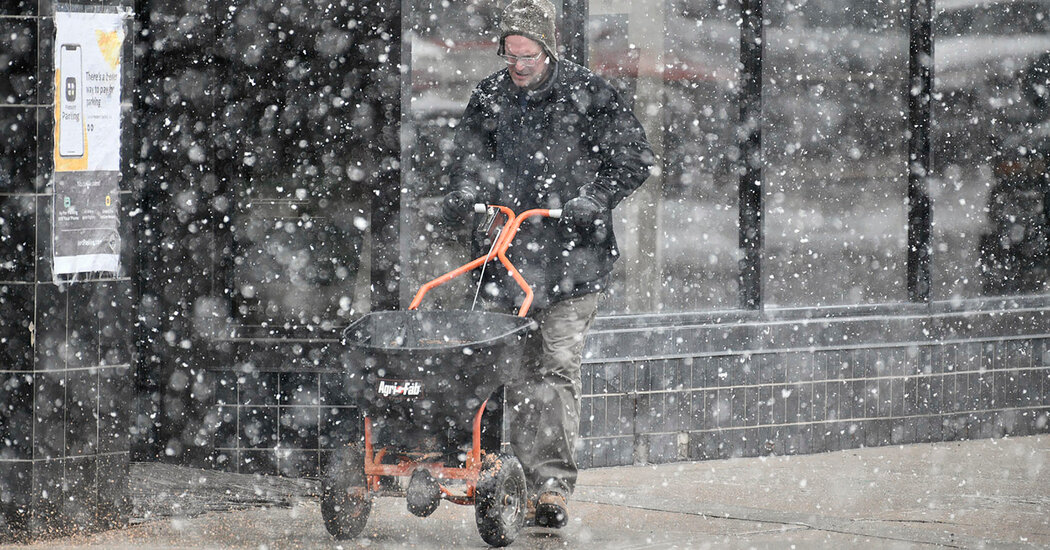 Heavy snow fell across central Pennsylvania on Monday, as millions of people braced for a spring storm to move into New York State and points north, bringing the potential for power outages and slushy roads.

A winter storm warning from the National Weather Service is in effect for counties across northern Pennsylvania and central and northern New York State through noon on Tuesday. Heavy, wet snow could down power lines, the service said, and travel could be “very difficult.” Roads in some parts of Pennsylvania were already impassable.

The southern parts of Pennsylvania had received up to 6 inches of snow by Monday afternoon, said Brian Hurley, a meteorologist with the Weather Service.

Mr. Hurley said the higher elevation regions in New York State, such as the Adirondacks and Catskills, which are sparsely populated, could receive the highest snowfalls of up to a foot. Syracuse, NY, could get 3 to 5 inches and Ithaca about 7 inches overnight, he added.

“It’s highly, highly impactful, and it could cause power outages and road closures,” Mr. Hurley said.

The mix of rain and snow was expected to change to snow in many areas before tapering off Tuesday morning, forecasters said.

New York City will be spared from snow, but it will get rain Monday evening and overnight, with wind gusts of up to 40 miles per hour, according to the forecast.

Tea Weather Prediction Center said that as much as six inches of snow had already been recorded in western Maryland by Monday afternoon.

Robert Deal, a meteorologist with the Weather Service in Binghamton, NY, said on Monday that the snow would be “more like cement and paste rather than the dry, fluffy stuff” and that in some areas it could fall at a rate of one to three inches per hour.

The snow “can quickly overwhelm the ability to treat roads, and it will also start to accumulate rapidly,” Mr. Deal said.

By Monday afternoon, the Weather Service in State College, Pa., said heavy snow had fallen. Several accidents had been reported, and some roads were impassable, it said.

The state’s Department of Transportation said on Twitter that speed limits had been reduced on several roads across the state because of the weather conditions. By Monday afternoon, the department had already reported several multivehicle crashes on Twitter.

In New York State, which was expected to get the brunt of the storm, snowfall of up to 11 inches is possible in some northern counties, according to the National Weather Service. Areas in higher elevations are more likely to have higher snowfall totals, while urban areas at lower elevations will see less, Mr. Deal said.

“I wouldn’t consider this to be a normal snowfall,” Mr. Deal said, noting its timing nearly a month after the start of spring. “That’s definitely reaching towards the higher end of totals.”

Dan Thompson, a meteorologist for the Weather Service in Albany, said that cities like Troy, Albany and Saratoga Springs would receive a thin coating of up to two inches of snow in some parts.

Forecasters said that high snowfall amounts and the rate at which the snow falls could create the potential for power failures in some areas.

“We’re looking at things and growing increasingly concerned about the impacts of power outages, with snow occurring this, kind of, late in the season,” Mr. Deal said. “It definitely looks like we could be seeing quite a bit of snow accumulating on trees and power lines, and potentially seeing numerous power outages in the higher elevation areas.”

In northwestern Massachusetts, the storm was expected to bring widespread rain and wet snow late on Monday night into Tuesday.

“It’s not going to be a winter storm for us,” said Alan Dunham, a meteorologist with the Weather Service in Boston.

Lily Chapman, a meteorologist for the Weather Service in Binghamton, said that snowstorms were not uncommon in April, but she added that people in the Northeast might not have an appetite for snow in the spring.

“After we’ve had such pretty nice weather, I think maybe people are probably not really in the mood at this point for it or ready to deal with it,” Ms. Chapman said. “Just be prepared to maybe have to shovel and for a sloppy commute, possibly.”