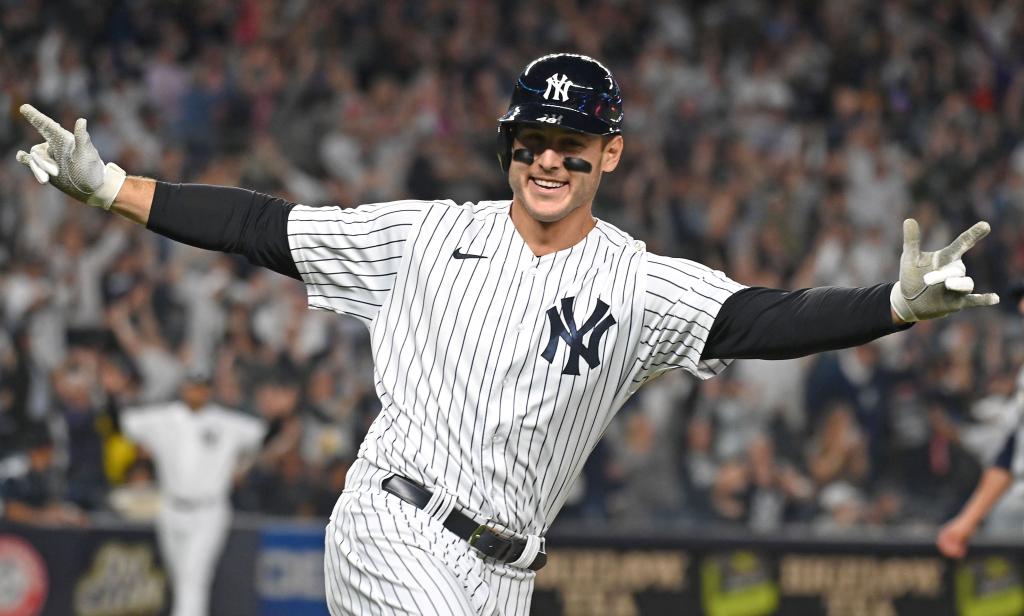 Even when one of their workhorse starters can’t take the ball at the last minute, the depth of the Yankees’ pitching staff continues to be up to the task.

After Luis Severino’s brief designation to the COVID-19 list necessitated a collective bullpen effort, spot starter Clarke Schmidt and Triple-A call-up Ryan Weber combined for 6 ²/₃ innings of one-run ball before Anthony Rizzo hit a walk-off home run in the ninth to help the rolling Yanks execute a three-game sweep of the rival Rays with a 2-1 win at the Stadium.

Ron Marinaccio and Michael King also provided scoreless relief efforts before Rizzo belted a game-winning homer to right off Shawn Armstrong with one out in the ninth. The first-place Yanks’ 14th win in 15 games boosted their staggering records to 29-7 at home and 47-16 overall for a 10-game lead over second-place Toronto and 12 games over Tampa Bay in the AL East.

“I just think it says a lot about what our clubhouse is all about. Guys coming in and feeling right away that they’re part of something,” Rizzo said after his fifth career walk-off homer. “There’s a lot of big names in the clubhouse, but you would never know inside. Everyone is treated equally whether you have a couple of days in the big leagues or 12, 13, 15 years.

Aaron Boone said Severino felt ill after Wednesday’s game, but the manager didn’t inform Schmidt of his start until Thursday afternoon when it was determined that the scheduled starter was ticketed for the COVID-19 list despite not testing positive for the coronavirus. Severino was reinstated following the game.

Clarke allowed one hit and walked one in his three scoreless innings. The righty hit Boone’s stated target of 50 pitches with his final one of the third, a strikeout of Randy Arozarena for the pitcher’s fifth punch-out of the game.

“That is the mentality here, whatever name is called you’re expected to get the job done, and it’s been happening every single time. That’s just a testament to this team,” Schmidt said. “It’s hard to prepare for something like this, so I just treated it like I was coming out of the bullpen.

“My mentality was to set the tone early and get some zeroes on the board and put the bullpen in a good spot.”

Weber, who had made 63 big-league appearances since 2015 with five teams, was summoned from Triple-A Scranton/Wilkes-Barre to replace Severino on the roster. The righty posted another zero in the fourth inning before Francisco Mejia reached him for a two-out solo homer to right in the fifth for a 1-0 Tampa lead.

Weber kept the score within a run through the visiting sixth, and the Yanks drew even in the bottom half. Righty Ryan Thompson relieved Brooks Raley with two outs and promptly walked DJ LeMahieu and Judge before Rizzo’s RBI single to center forged a 1-1 tie.

“Unbelievable … I kept the team in the game and we won, so it was fun,” said Weber, who was designated for assignment afterward. “Every single person here is doing the job and doing it really well. For me to come up and help the team, they see that. This team is rolling right now, and it was fun to be a part of it for one night.”

Weber came back out for his fourth inning of work in the seventh and recorded two more outs before Boone summoned Marinaccio. He completed the frame and then added a spotless eighth before King fanned two in the ninth, which ended with a tumbling catch by Marwin Gonzalez in right to maintain the 1-1 knot and set up Rizzo’s winning blast.

“That’s a good one there, with Sevy getting sick and wondering how we were going to do it,” Boone said. “A lot of really big efforts tonight.

“[Schmidt and Weber] were awesome. Clarke, we couldn’t have drawn it up better, and then Weber coming in and navigating the way he did, was huge. We could’ve been really up against it. … But those efforts were just enormous.”