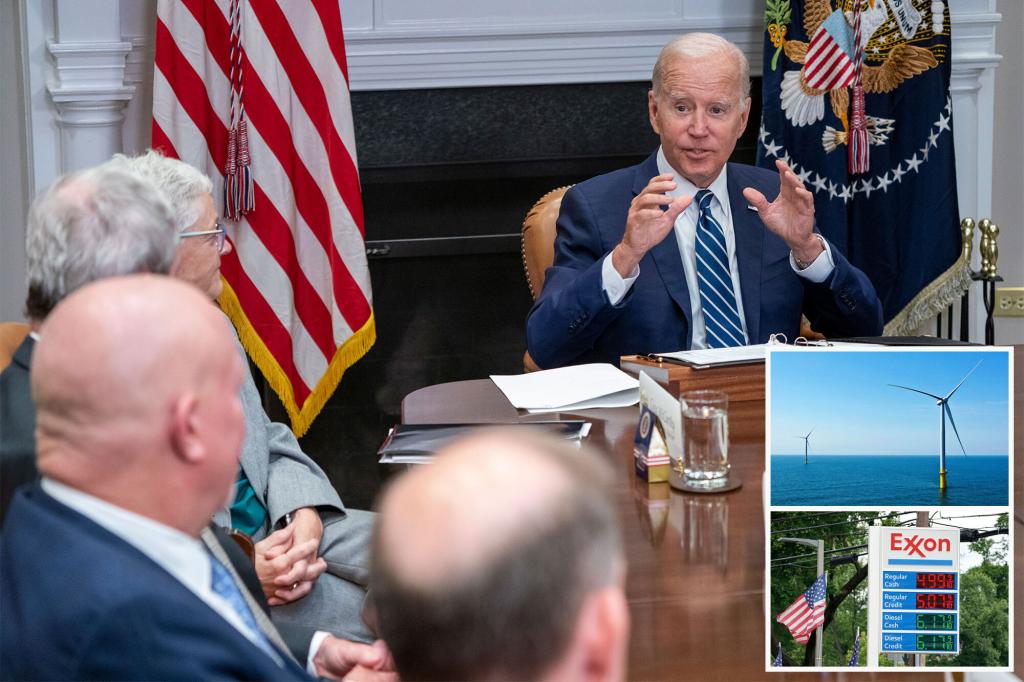 The White House on Thursday faced a barrage of questions about whether President Biden is doing enough to address record gas prices after he skipped a summit with oil executives and instead met with wind-industry leaders.

“When I think environment, I think jobs,” Biden told a group that included five wind-industry CEOs in the White House Roosevelt Room — shortly after a nearby summit that Biden refused to attend with seven oil CEOs and Energy Secretary Jennifer Granholm.

At the daily White House briefing, reporters called out the awkward juxtaposition of energy events as high fuel costs contribute to the worst inflation since 1981 and send Biden’s approval rating to new lows.

“Why did the president stop by the wind executives meeting? Why didn’t he spend some time with the oil executives as well?” Associated Press reporter Aamer Madhani asked White House press secretary Karine Jean-Pierre.

Jean-Pierre defended Biden’s meeting with wind executives as “part of his schedule.”

Keep up with today’s most important news

Stay up on the very latest with Evening Update.

“The president—it was a stop by. This is something that he does very often,” Jean-Pierre said. “It was — there were governors in that meeting who were virtual and in-person. So we see this as a part of his schedule where there was actually a meeting here at the White House.”

Fox News correspondent Peter Doocy picked up the line of questioning, asking Jean-Pierre of the wind executive meeting, “How did that help lower gas prices?

“The president has done a — so let me step back for a second,” Jean-Pierre began his answer, before Doocy interrupted to press his point.

“No, no, no,” Doocy interjected. “By meeting with offshore wind folks and not with oil and gas CEOs, how does that lower gas prices? You said he’s done everything in his power. They were a mile away.”

Jean-Pierre said, “I just want to take us back a second on how we got here.” She noted that gas prices are up about $2 per gallon since Russia’s Feb. 24 invasion of Ukraine and noted that Biden previously ordered the release of a million barrels per day from the Strategic Petroleum Reserve and allowed a higher proportion of ethanol in gas over the summer, though neither step lowered prices.

“The president is trying to figure out and take steps on how we can take, bring the gas prices down,” Jean-Pierre said. “And we have a high level of oil production. So what we are asking the oil refinery companies to do is to take that production — turn it into, refine that oil so that there is capacity. We are not at capacity right now. And it does matter that the secretary of energy, which is her purview, that is her portfolio, to meet with these oil execs, that she does on pretty regular basis —”

Doocy followed up asking if Biden’s wind-power meeting implied that he believes people must choose between buying an electric car or paying high gas prices.

“That’s apples and oranges, that is not the same,” Jean-Pierre said, before pivoting to note that Biden on Wednesday asked Congress to temporarily waive the federal gas tax of 18.3 cents per gallon — though the idea received a cool reception from members of both political parties.

“What we’re trying to do right now is to deal with an acute problem right now, which is why the president, again, again asked for a 90-day suspension of the gas tax — a gas tax holiday — that is going to make a difference,” Jean-Pierre said.

“All right, we’re done,” Jean-Pierre cut off Doocy before calling on a different reporter.

Later in the briefing, Jean-Pierre was pressed by other reporters on what exactly Biden would be willing to do to help oil refiners produce more gasoline.

CNN reporter Phil Mattingly asked about the fact that refiners are “operating at about 93.94% capacity.” She maintained, “there’s a difference between the share of existing capacity being utilized and the amount of total capacity available.”

New York Times reporter Zolan Kanno-Youngs pointed out that some oil refiners faced regulatory hurdles, such as a refinery in the Virgin Islands that has a troubled environmental record.

“Will the administration consider loosening any permitting regulations for refineries that have had environmental concerns to expand capacity?” he asked.

“I don’t have anything to share” on that point, Jean-Pierre said. “All I can say is the president is willing to use his executive authority to do what he can to give relief to the American public.”

The average price of a gallon of regular gas is about $5, according to AAA.

Renewable sources such as wind, meanwhile, make up a relatively small share of US energy production.

In 2021, wind power comprised just 3.3% of US energy production, according to the US Energy Information Administration.

CEOs at the wind-power meeting with Biden included Liz Burdock of the Business Network for Offshore Wind, David Hardy of Ørsted Offshore North America, Robert Blue of Dominion Energy, Jeffrey Grybowski of US Wind and Lars Pedersen of Vineyard Offshore.

Dominion Energy, based in Virginia, has a broad portfolio of electricity sources, including nuclear, coal and natural gas.

Oil-industry executives said Thursday afternoon that they were encouraged by their lower-profile meeting with Granholm.

The American Petroleum Institute and American Fuel & Petrochemical Manufacturers went on, “While these challenges and their causes are complex—from Russia’s war in Ukraine to market imbalances leftover from COVID—productive outcomes today should send a positive signal to the market that the US is committed to long-term investment in a strong US refining industry and aligning policies to reflect that commitment.”

Biden told reporters on Monday that he would not meet with the oil industry leaders, even though he’s attempted to blame them for high prices. The president has alleged that the industry isn’t drilling or refining enough and accused them of profiteering, sparking a war of words.

Chevron CEO Michael Wirth, who leads the country’s second-largest oil company, on Tuesday wrote in an open letter that data contradict Biden’s claims regarding the industry not drilling or refining enough.

“In 2021, Chevron produced the highest volume of oil and gas in our 143-year history. In the first quarter of 2022, our US production was 1.2 million barrels per day, up 109,000 barrels per day from the same quarter a year earlier,” Wirth wrote.

“In the Permian Basin [centered in West Texas] alone, we expect production to approach 750,000 barrels per day by the end of the year, an increase of more than 15 percent from 2021,” Wirth added.

“And Chevron’s US refinery input grew to 915,000 barrels per day on average in the first quarter of this year from 881,000 in the same quarter last year.”

“We need more refining capacity. This idea that they don’t have oil to drill and to bring up is simply not true,” Biden said Tuesday, responding to Wirth. “We ought to be able to work something out whereby they’re able to increase refining capacity and still not give up on transitioning to renewable energy.”

High gas prices are contributing to the highest inflation rate since 1981, though Federal Reserve Chairman Jerome Powell said Wednesday that “inflation was high before — certainly before the war in Ukraine broke out.”

Biden on Wednesday appealed to gas station owners to unilaterally lower prices at the pump. About 60% of US pumping stations are owned by a person or family that operates just one location.

Republicans say Biden contributed to the gas-price crisis by seeking to impose a moratorium last year on new oil drilling on public lands and by spiking new oil pipeline projects, including the Keystone XL pipeline from Canada.