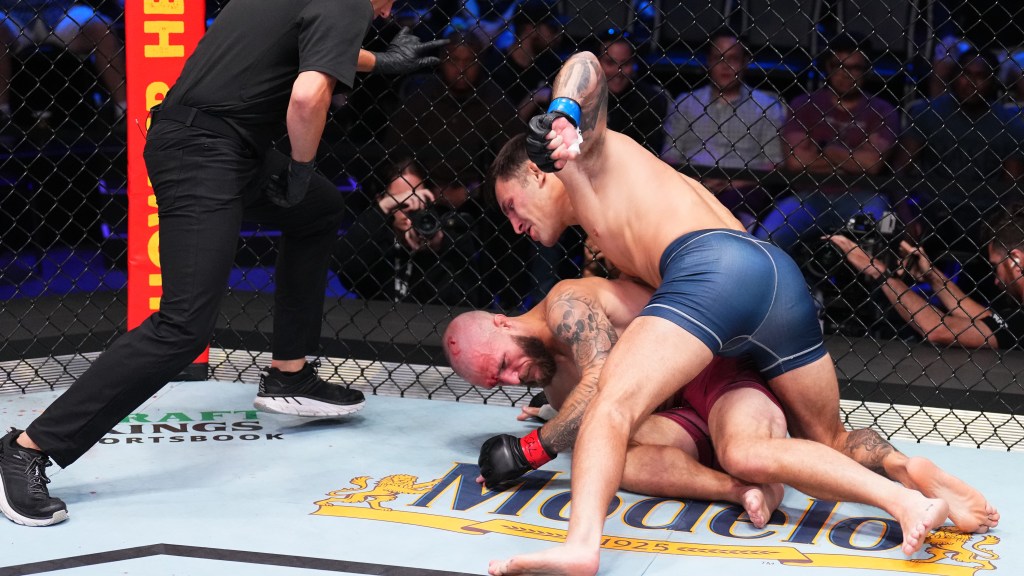 The fourth week of the sixth season saw 10 fighters compete for their shot at a UFC contract. When it was all said and done, White was impressed enough to grant entry to every winner.

This week, lightweights began and end the show with incredible knockouts. Nazim Sadykhov (10-1) put the finishing touch on Ahmad Hassanzada (6-2) in the third round to open the card, and in the feature bout, Esteban Ribovics (11-0) finished Thomas Paull (11-4) in the first round.

The only other finish of the event came in the penultimate bout, and it didn’t take long for it to occur. Claudio Ribeiro (10-2) dropped and finished Ivan Valenzuela (8-2) just 25 seconds into their middleweight bout with a hard left hand. The two fights that went to a decision were exciting bouts in which the competitors had a chance to show off a lot of their skills.

At the conclusion of the event, Dana White extended UFC contracts to all five winners. In addition to the fighters who finished their fights, Jose Johnson (15-7) and Hailey Cowan (7-2) won in judges’ decisions, but showed enough to earn a contract from the UFC boss.

The UFC Apex hosted Tuesday’s card, which streamed on ESPN+. The full results of Dana White’s Contender Series 50 include:

Continue reading below for more details about the event.

Sadykhov hurt his opponent early with a spinning kick to the body. He then took the fight to the ground and took top position, where he landed heavy ground and pound strikes. A nasty cut on Hassanzada was opened early, making this one a bloody fight quickly. Hassanzada managed to reverse position and unleash some offense of his own before the fighters stalled against the fence.

Striking exchanges were frequent early in the second round, with both fighters landing clean. Hassanzada went to his wrestling game, but was unable to keep Sadykhov on the mat for long. In the closing seconds, a hard shot to the body dropped Hassanzada.

The cageside doctor checked on Hassanzada between rounds, but the fight continued. Sadykhov came out firing hard strikes, sensing he could get a finish quickly. It didn’t come right away, but with three minutes remaining, Sadykhov found a home for a hard right hand to end the fight by knockout.

The lone women’s bout of the evening began with a feel-out process on the feet before clinching against the cage, where Cowan looked to bring the fight to the ground. A cut was opened up over the right eye of Leite from a hard right elbow by Cowan as they jockeyed for position. The fight was paused so the doctor could take a closer look, but the fight continued. The remainder of the round was spent in space, with Cowan landing quick strikes as she moved around comfortably.

Leite was able to get the fight to the mat early in the second round. After initial facing resistance from Cowan, Leite found her way to the back and began looking for a rear-naked choke. They scrambled for position, and Leite locked in a deep arm triangle, but the tap would not come.

Leite looked to bring the fight back to the mat, but this time Cowan reversed an early takedown and began working from top position. After landing a few short ground and pound strikes, Cowan went for a submission, but was reversed. After securing top position, Leite began landing short strikes of her own. Cowan tried to scramble back to her feet in the closing seconds, but this one ended with Leite looking for a rear-naked choke at the horn.

The fight started with a fast pace of quick exchanges, but Johnson slowed things down momentarily with a takedown. Cartwright scrambled and locked in a deep D’Arce choke, but Johnson remained calm and worked his way free. The positional scramble continued, but they eventually ended up back on the feet. Not much time was spent standing, but when they got back to the mat, this time Johnson scrambled to a favorable position. From full mount, Johnson landed heavy strikes until the round concluded.

Less than a minute into the round, Cartwright found the back of Johnson and looked for a rear-naked choke. He was unable to secure the attempt, but maintained top control. The position stalled and they were stood up, but Cartwright immediately shot back in for another takedown and the scrambles for position continued. Johnson threatened choke attempts when on top, but could not lock anything in deep and opted to look for strikes until the round ended.

Cartwright continued his aggressive approach to bring the fight to the canvas. After getting Johnson to the ground, he found himself on the receiving end of some hard elbows from the bottom. After scrambling again, Johnson locked in a triangle choke attempt and landed more elbows. A moment later, Cartwright attempted a kimura but ended up with Johnson on top in full mount landing more elbows.

Ribeiro sized up Valenzuela for the first few seconds of the bout. A hard right leg kick spun Valenzuela around. Just as Valenzuela completed his spin and attempted to land a spinning backfist, a hard left punch from Ribeiro crushed his chin and he crashed to the canvas. Ribeiro won by knockout in less than half a minute.

Turn your sound on for this Octagon side view of Claudio Ribeiro’s KO 🔉 #DWCS pic.twitter.com/Xzylxx5hvl

The feature bout of the evening started off blazing as Ribovics unleashed hard strikes from the beginning, but Paull answered back with a few counters of his own. A low blow from Ribovics caused a brief pause in the action, but when the fight resumed, the action remained heavy. Ribovics continued his high-output offense and found home for a clean right hook that sent Paull to the ground. After a few follow-up punches, this one was all over.

RIGHT ON THE BUTTON 🎯 #DWCS pic.twitter.com/2h9sXjHN7e