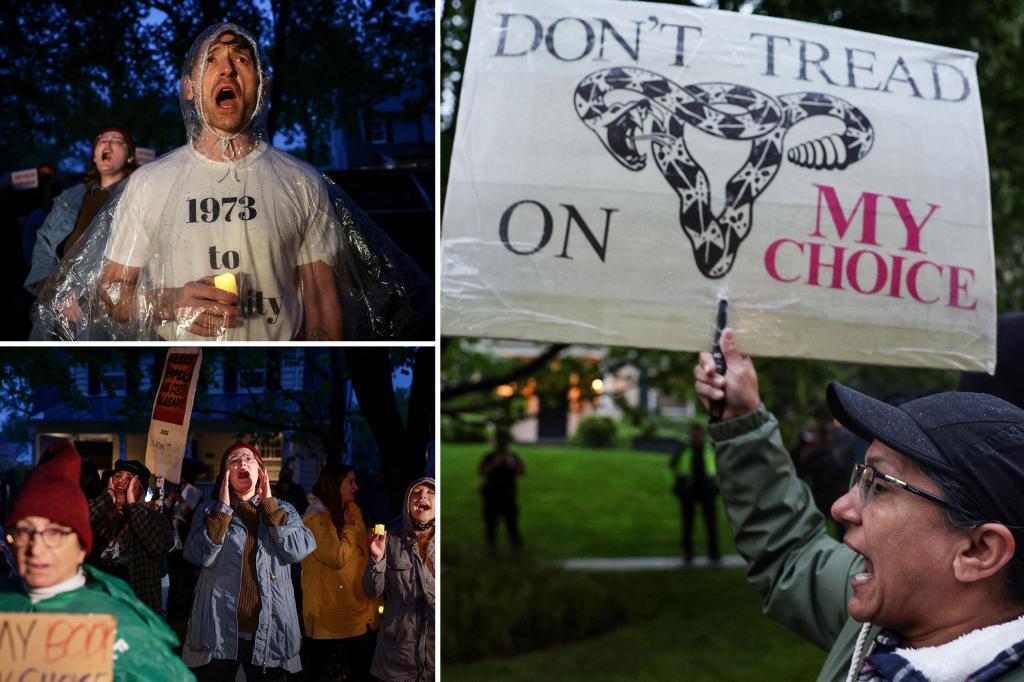 About 100 demonstrators, hoisting signs and chanting pro-choice slogans, marched from Justice Brett Kavanaugh’s house in Maryland, to Chief Justice John Roberts’ home nearby, Bloomberg reported. After returning to Kavanaugh’s Chevy Chase home, police instructed the group of protestors to disperse, according to the outlet.

“The time for civility is over, man,” protests organizer Lacie Wooten-Holway, 39, told Bloomberg. “Being polite doesn’t get you anywhere.”

Video posted on Twitter showed a group gathered during the rainy, cool evening outside Roberts’ home chanting, “The whole world is watching!” and “We will not go back“more”My body, my choiceon Kavanugh’s street.

It was unclear if Kavanaugh or Roberts or their families were home during the protests, according to Bloomberg.

The gathering outside Kavanaugh’s home was met with disapproval by at least one person who passed by it, according to a report.

“That I don’t agree with,” the man said of the protest, according to The Washington Post. “I think you vote, and you expand the court. You don’t go to a guy’s house.”

Kavanaugh is among the five justices Politico reported on Monday had cast preliminary votes to overturn Roe v. Wade, the landmark 1973 ruling that legalized abortion nationwide. The majority opinion was written by Justice Samuel Alito, and it was unclear how Roberts — ordered an investigation into the unprecedented leak and slammed it as an “egregious breach of trust”– planned to vote.

The decision that leaked has proven controversial, sparking outcry from Democratic politicians and liberals across the country.

Half of American voters oppose overturning the 1973 landmark abortion ruling, while 28% believe it should be struck down, according to a poll released Wednesday.

And it wasn’t just Democrats unhappy by the leak.

Sen. Marco Rubio (R-Fla.), meanwhile, suggested the leak of the draft opinion published by Politico Monday was intended to “intimidate” the justices to reconsider their votes.

Saturday night’s demonstration comes as pro-choice group “Ruth Sent Us” prepares to protest Wednesday at what it called “the homes of the six extremist justices.”

White House Press Secretary Jen Psaki on Thursday did not weigh in on protests outside a justice’s home, while urging those who partake in them to remain peaceful.

“I think our view here is that peaceful protests — there’s a long history in the United States in the country of that,” she said during a press briefing. “And we’ve certainly encouraged people to keep it peaceful and not resort to any level of violence.”

The demonstration also came after on Tuesday thousands of demonstrators gathered in New York City’s Foley Square to protest the leaked decision.