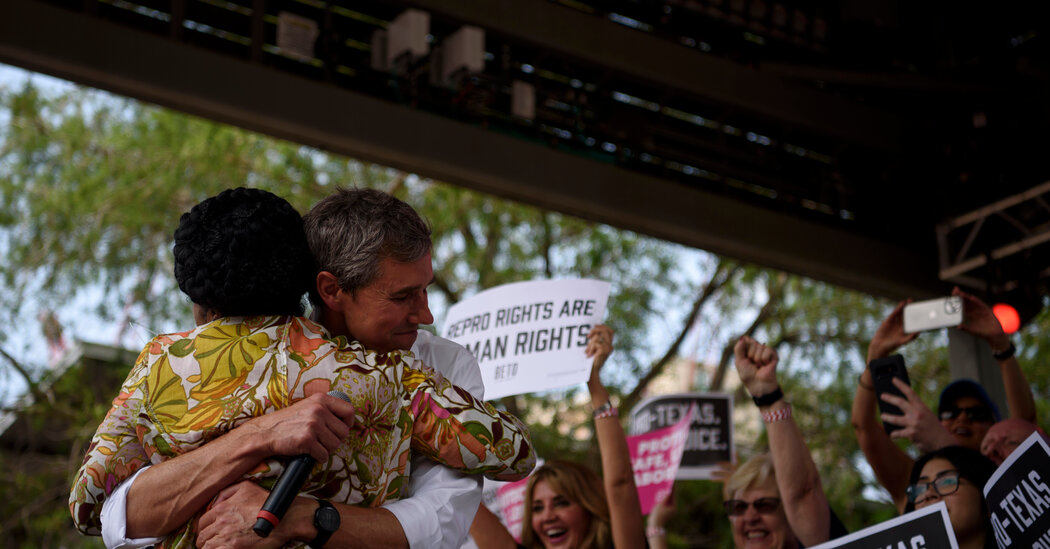 HOUSTON — Several thousand people in Texas’ largest city rallied for abortion rights on Saturday, one of numerous demonstrations held across the country days after a draft opinion from the Supreme Court overturning Roe v. Wade was leaked. They were joined by a host of Democratic officials, including former Representative Beto O’Rourke, who is running for governor.

The rally in Houston, at Discovery Green, a downtown park, might have been the largest gathering of the protests that were scheduled in more than a dozen cities and communities on Saturday. They varied widely in scale and attendance. A morning event outside a Catholic church in Manhattan drew dozens of people. A demonstration in downtown Detroit featured roughly 200. A rally in Chicago attracted more than a thousand.

Many more protests were planned on Sunday in cities including San Jose, Calif., Kansas City, Mo., Fort Wayne, Ind., Oklahoma City and Orlando, Fla. Next weekend, thousands could gather in Washington for the Women’s March.

In Houston on Saturday, some in attendance took advantage of the rally to turn it into a family outing. Marco Barbato, 35, an engineer, brought his 4-year-old daughter so she could see how democracy worked and witness people standing up for what they believed in, he said.

“It is a woman’s business to do what they wish with their bodies. She needs to know that, and she needs to be heard and speak up herself,” Mr. Barbato said, referring to his daughter.

Another protester, Sara Mielke, who wore a dress made entirely of hangers, said she was hurt and disappointed by the news that Roe could be struck down. “The government should not be getting between women and their doctors when it comes to reproductive health,” she said.

Speaking after the event, Mr. O’Rourke said he had been moved by hearing the personal stories of so many women. “People’s lives are on the line now, and I’m going to do everything in my power to fight for them,” he said after the event. During the rally, he was joined by speakers that included US Representative Sheila Jackson Lee, Texas State Senator Carol Alvarado and the mayor of Houston, Sylvester Turner.

From Opinion: A Challenge to Roe v. wade

In Detroit, demonstrators put in front of the Theodore Levin US Courthouse downtown. After listening to speakers for about a half-hour, the group marched through downtown, chanting slogans that included “2-4-6-8, you can’t make us procreate.”

Heather Summers Webb of Oakland County, attending the rally with her 19-year-old daughter, said she has worked in a variety of nursing roles and has always thought that every woman should have a choice. She added that working as an abortion nurse broadened her understanding of the importance of abortion rights.

“I didn’t realize how profound some of the women’s reasons were,” she said. “I didn’t realize how many women show up to an abortion clinic because their resources are already depleted — taking care of themselves, children, aging family members, disabled family members, working multiple jobs — and then there’s just no way that they could have another mouth to feed.” She went on to cite several more obstacles she had seen women face such as a lack of access to prenatal care.

“There are so many reasons and, really, in the end, it’s just up to that woman and her body,” she said. “It really took that point home for me.”

Kess Ballentine, a professor of social work at Wayne State University in Detroit, also said her own experiences had underscored the importance of abortion rights for her.

“I’ve been pro women’s rights since I was a little girl, but I will say that having been through difficult pregnancies opened my eyes to like a new layer of the whole situation,” she said, adding that it was critical for women to have a choice that would help them navigate health issues during pregnancy.

In Chicago, on one of the warmest days in weeks, a large crowd gathered at Federal Plaza and heard speakers including Gov. JB Pritzker of Illinois, who told the crowd that “politicians do not belong in the doctor’s office, period.”

Greta Powell, an attorney from suburban Oak Park, attended the protest with her husband, mother and two young daughters, 4 and 10 months. She said that even though she felt that Illinois would keep abortion legal, the thought of overturning Roe was extremely worrisome.

“Assuming that the court reverses Roe, my daughters will be growing up with less rights than I had, and that’s very troubling to me,” she said

The State of Roe v. wade

What is Roe v. Wade? Roe v. Wade is a landmark Supreme court decision that legalized abortion across the United States. The 7-2 ruling was announced on Jan. 22, 1973. Justice Harry A. Blackmun, a modest Midwestern Republican and a defender of the right to abortion, wrote the majority opinion.

What was the case about? The ruling struck down laws in many states that had barred abortion, declaring that they could not ban the procedure before the point at which a fetus can survive outside the womb. That point, known as fetal viability, was around 28 weeks when Roe was decided. Today, most experts estimate it to be about 23 or 24 weeks.

What else did the case do? Roe v. Wade created a framework to govern abortion regulation based on the trimesters of pregnancy. In the first quarter, it allowed almost no regulations. In the second, it allowed regulations to protect women’s health. In the third, it allowed states to ban abortions so long as exceptions were made to protect the life and health of the mother. In 1992, the court tossed that framework, while affirming Roe’s essential holding.

Donna Lewis, who lives in Atlanta but was in Detroit to visit family for Mother’s Day, said she felt compelled to attend with her 30-year-old son to stand up for others. In 1990, she protested against abortion, but she said she had changed her mind. Ms. Lewis held a sign that read, “I don’t regret my abortion.”

“I had an abortion as a teenager, but after I had children, I realized how much it really is our right to do that,” she said.

Although the crowd was dominated by supporters of abortion rights, a group of about 20 anti-abortion counterprotesters stood across from the plaza and voiced its opposition.

“We believe in protecting the innocent, the voiceless children in the womb,” said Julio Arriola, a member of the Christ Forgiveness Ministries of Chicago. Addressing the fact that his side was greatly outnumbered on Saturday, Mr. Arriola said, “We believe in standing up for righteousness, even if it’s less popular.”

Tensions were higher earlier that morning in Lower Manhattan, when about a dozen members of the Basilica of St. Patrick’s Old Cathedral gathered outside the church and were met by around 75 abortion rights demonstrators.

On the first Saturday of the month, the church members usually walk in an organized procession to a Planned Parenthood clinic a couple of blocks away. But this week, out of safety concerns, some of the members instead decided to station themselves outside the church and behind a fence that separated the church from the street. There, they stood in the rain, singing hymns and praying over their rosaries.

On the other side of the fence, a number of the abortion rights supporters shouted and sang, “Thank God for Abortion.” Some also hung up a green, black and white sign that said, “Anti-Abortion Laws Kill Us.”

One of the protesters, Payal Patel, a resident of Harlem who provides family medicine services, abortions and abortion pills across the city, said that people in New York City were lucky because abortion would remain legal even if Roe were overturned. But she said it was important to teach future generations “that abortion is health care.”

The Rev. Brian A. Graebe, who has been the pastor of the church for the past three years, said he saw the leaked draft of the Supreme Court ruling as a sign of hope.

“We’ve certainly had more than our share of setbacks over the past 50 years on this issue, but it’s something that would be a wonderful step forward for our society,” he said.