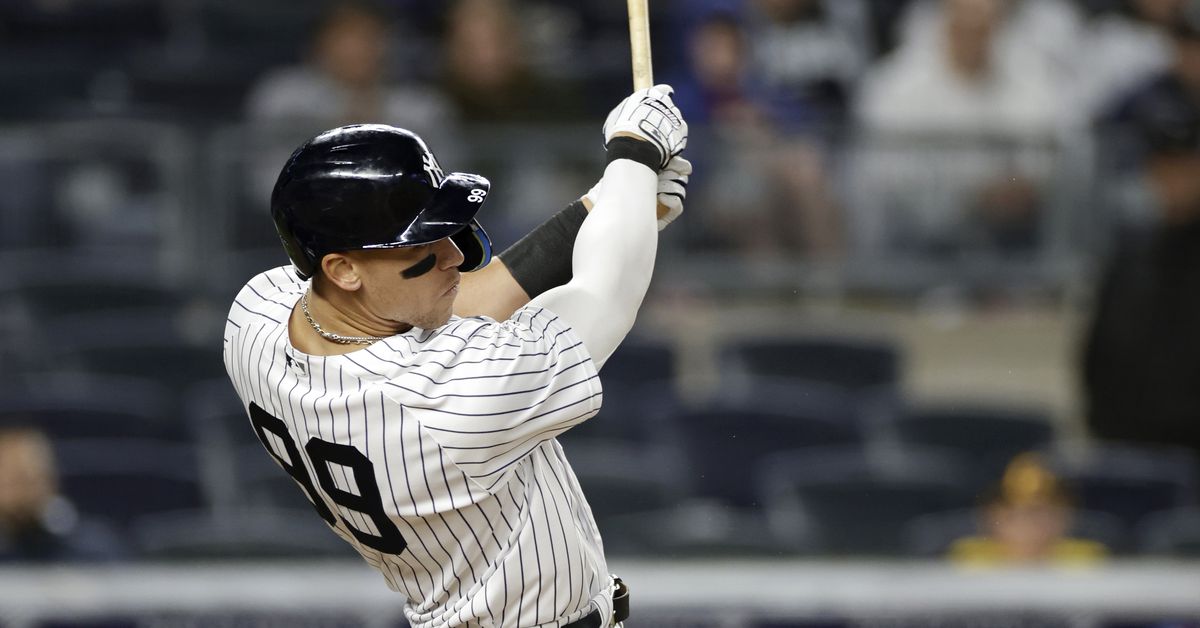 The umpires ejected a relief pitcher, Blue Jays manager Charlie Montoyo, and the Toronto pitching coach as 30,000 fans looked on at Yankee Stadium tonight. Oh, I’m sorry, was that not the lede you were expecting? Well, it sure seemed that’s what the umpires were looking for.

Undeterred by a two-run deficit in the ninth against Blue Jays closer Jordan Romano, the Yankees mounted a stunning rally. Aaron Judge murdered a baseball 450 feet for his first career walk-off home run as New York scraped by Toronto on Tuesday night in the Bronx with a 6-5 victory.

It was not an easy night for Yankees starter Luis Severino by any means. Things looked bleak from the very beginning, as George Springer opened the game with a full-count home run over the left-field fence to give the Blue Jays an immediate 1-0 lead. After a Bo Bichette single, Sevy recovered, striking out the next three batters he faced.

Alejandro Kirk led off the second for the Jays with a very generous single on what should have probably been an error by Gleyber Torres. Severino then walked Matt Chapman and surrendered a two-run double (initially ruled a homer) to Santiago Espinal that gave the Blue Jays a 3-0 lead. Catcher Tyler Heineman then bunted Espinal over to third, and while Sevy got Springer to strike out, he then walked Bichette.

At this point, Yankees skipper Aaron Boone sensed the game getting out of reach, and began to leave the dugout, but Severino had other ideas.

After Severino pulled a “Mussina,” the young right-hander showed why faith in him was not misplaced. He got Vladimir Guerrero Jr. to ground out to second to end the threat, put down the Jays in order on just nine pitches in the third, struck out the side in the fourth, and got Springer to fly out and Bichette to strike out to lead off the fifth. It was a display of absolute guts, and given the fact that the Yankees do not have an off-day until the 30th, the fact that Severino was able to get into the fifth was big.

Of course, the offense wasn’t doing Sevy any favors. For the second time in four days, the Yankees did not have a hit during the first five innings, as they were absolutely flummoxed by whatever Toronto starter Yusei Kikuchi was doing (much like on May 4th). That’s not to say that Kikuchi was at his best. He struggled to find the strike zone with consistency, as only 54 of his 89 pitches went for strikes. When the Yankees got the bat on the ball, they hit it hard, as the average exit velocities for all three of his pitches were in the 90-95 range. But they did not put the bat on the ball much at all, whiffing 34 percent of the time and striking out seven times. Heading into the bottom of the sixth, the Yankees only had three baserunners, and had been retired in order since two walks to lead off the second.

And that’s when pandemonium hit. DJ LeMahieu led off the inning with the Yankees’ first knock of the ballgame, a double that looked like a home run off the bat. Judge then laced a ground ball down the third base line that two-time Platinum Glove winner Matt Chapman snared cleanly but bobbled on the transfer. Anthony Rizzo followed that up with a long fly ball into left-center field. At 108.2 mph off the bat, it traveled 383 feet and had an xBA of .990, but here, it simply allowed LeMahieu to move over to third.

With runners on first and third and one out, the Blue Jays turned to their bullpen, bringing in Yimi Garcia. Giancarlo Stanton immediately made them pay with a big, three-run home run down the right field line.

As home runs go, this is one of the most baffling. He drilled it 105.1 mph off the bat. It looked like a no-doubter off the bat. In the end, however, it traveled just 335 feet, making it a home run in Yankee Stadium only. Former PSA writer Ryan Chichester — who now has a verified Twitter account! — sums it up best:

This thing looked like a no-doubter off the bat, and somehow became a short porch job.

The baseballs are indeed behaving weirdly this season. https://t.co/PXGAXy1AYt

While the baseball is a major topic of discussion, that’s a discussion for another article. What mattered here is that the Yankees had tied the game on this bizarre home run — and the chaos of the inning had only just begun.

After getting a first pitch strike on Josh Donaldson, Garcia proceeded to drill the Yankees’ DH with a 94-mph fastball. As Donaldson walked down the line, the Yankee Stadium faithfully rained down derogatory chants and the Yankees bench barked complaints, both groups believing that it was intentional. After the umpires agreed, they decided to agree with the crowd, giving Garcia the heave-ho. The Blue Jays, naturally, went absolute ballistic; for a few minutes, the Toronto bench all but cleared, pitching coach Pete Walker got ejected, and the players dragged Garcia and their manager away from the umpires to keep the situation from escalating.

The delay seemed to deflate the Yankees’ momentum, however, as David Phelps was able to come in and prevent any more damage.

Things continued to get spicy with Jonathan Loáisiga on the mound in the top of the seventh. With Springer on first and one away, Loáisiga threw up and in to Bichette. The Blue Jays bench barked, and skipper Montoyo got ejected. Then, to make matters worse for the Jays, Bichette grounded into an inning-ending 5-4-3 double play.

After the Yankees failed to capitalize on a one-out walk by Joey Gallo, who was pinch-hitting for Kyle Higashioka, Loáisiga walked Guerrero to lead off the first. Chad Green came in, struck out Teoscar Hernández, and then surrendered an RBI double to Lourdes Gurriel Jr., who advanced to third on the throw home. That heads-up play allowed him to score on a Kirk sac fly. Chapman struck out to end the inning, but the damage was done, and the Jays had a 5-3 lead.

Tim Mayza and Trevor Richards shut down the Yankees lineup in the bottom of the eighth, working around a one-out Stanton single. Even after Wandy Peralta pitched a fairly effortless ninth, the game looked over, as the Blue Jays turned to the closer Romano, who has given up just three runs so far this year (only two earned). True to expectations, Isiah Kiner-Falefa struck out. Catcher Jose Trevino, who entered the game in the top of the eighth, worked a walk. LeMahieu did not take his bat off his shoulder, walking on five pitches and bringing the winning run to the plate with quite the threat to end it.

Judge dug in against Romano, and fouled off three pitches (including two sliders). Romano then threw what was probably the worst slider he has thrown all season … and Judge is the last person that you want to leave a hanging slider up in the zone to:

The polar opposite of a Yankee Stadium cheap shot.

It was exactly how you would imagine an Aaron Judge walk-off home run, which until tonight, existed only in our imaginations.

Peralta gets credited with the win, improving to 1-0, while Romano drops to 1-2. With the win, the Yankees improve to 21-8 and still hold the best record in baseball. That said, there’s no rest for the weary as the Yankees can only celebrate Judge’s magnificent walk-off for so long. They’re due back for first pitch tomorrow afternoon against Toronto at 12:35 pm ET, when Jameson Taillon will match up with José Berríos. Tune in as the Yankees aim for their seventh consecutive series victory!