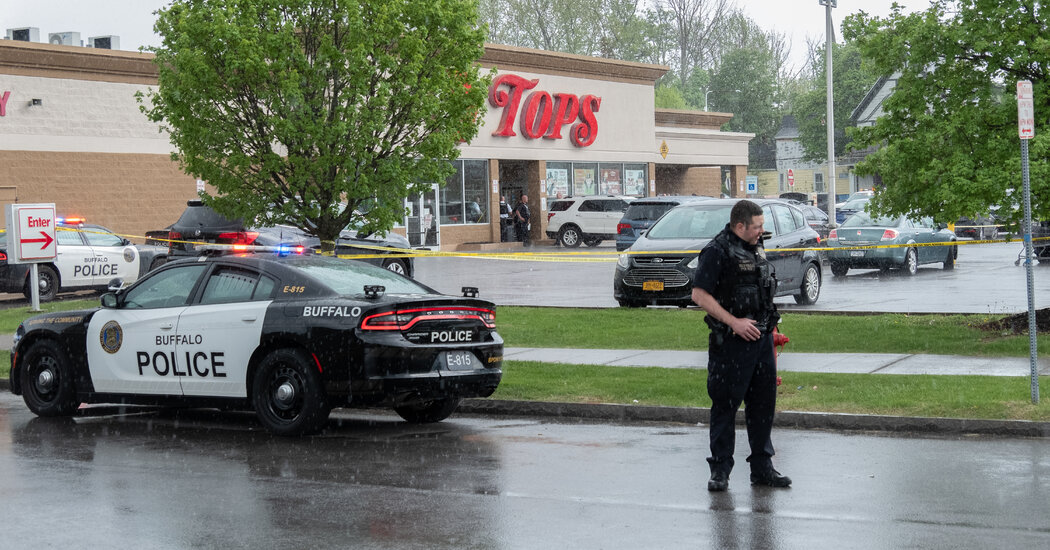 An emergency services dispatcher in Buffalo could be fired after being accused by a supermarket employee of hanging up on a 911 call during a racist shooting rampage at the store last week.

The dispatcher was placed on administrative leave on Monday after an internal investigation and faces a disciplinary hearing on May 30, at which “termination will be sought,” Peter Anderson, a spokesman for the Erie County executive, said.

The investigation was prompted by comments to The Buffalo News by Latisha Rogers, an assistant office manager at the Tops supermarket where a white gunman killed 10 Black people in one of the worst racist mass shootings in the recent history of the United States.

The man charged in the killings, Payton Gendron, 18, has been accused of traveling 200 miles from his home in Conklin, NY, specifically to kill Black people, fueled by a racist belief in so-called replacement theory.

On Saturday, the authorities say, he opened fire outside the supermarket, then went inside and continued to shoot shoppers and workers before surrendering to the police. He has pleaded not guilty to first-degree murder charges.

Ms. Rogers told The News that after calling 911 while trying to hide from the gunman, she had whispered in hopes of continuing to elude his notice. The dispatcher, she said, had admonished her.

“She was yelling at me, saying, ‘Why are you whispering? You don’t have to whisper,’” Ms. Rogers told The News, “and I was telling her, ‘Ma’am, he’s still in the store. He’s shooting. I’m scared for my life. I don’t want him to hear me. Can you please send help?’ She got mad at me, hung up in my face.”

Ms. Rogers, 33, told The News she had then called her boyfriend and told him to call 911.

She offered a similar description of events in a separate interview with The New York Times, saying she had been standing behind the store’s customer service counter when she first heard gunfire.

After ducking down, she told The Times, she pulled out her cellphone, called 911 and whispered to the dispatcher that someone was shooting in the store. The dispatcher had asked why she was whispering, and then the connection broke, Ms. Rogers said in the interview.

Mr. Anderson, the spokesman for the Erie County executive, Mark Poloncarz, told Fox 5 New York that the dispatcher’s “action had no bearing on the dispatching of the call.” At a news conference on Sunday, Buffalo’s police commissioner, Joseph A. Gramaglia, said the first 911 call came in at 2:30 pm and that officers had arrived at the store at 2:31.

Officials with the union that represents the dispatcher, CSEA Local 815, could not immediately be reached for comment.