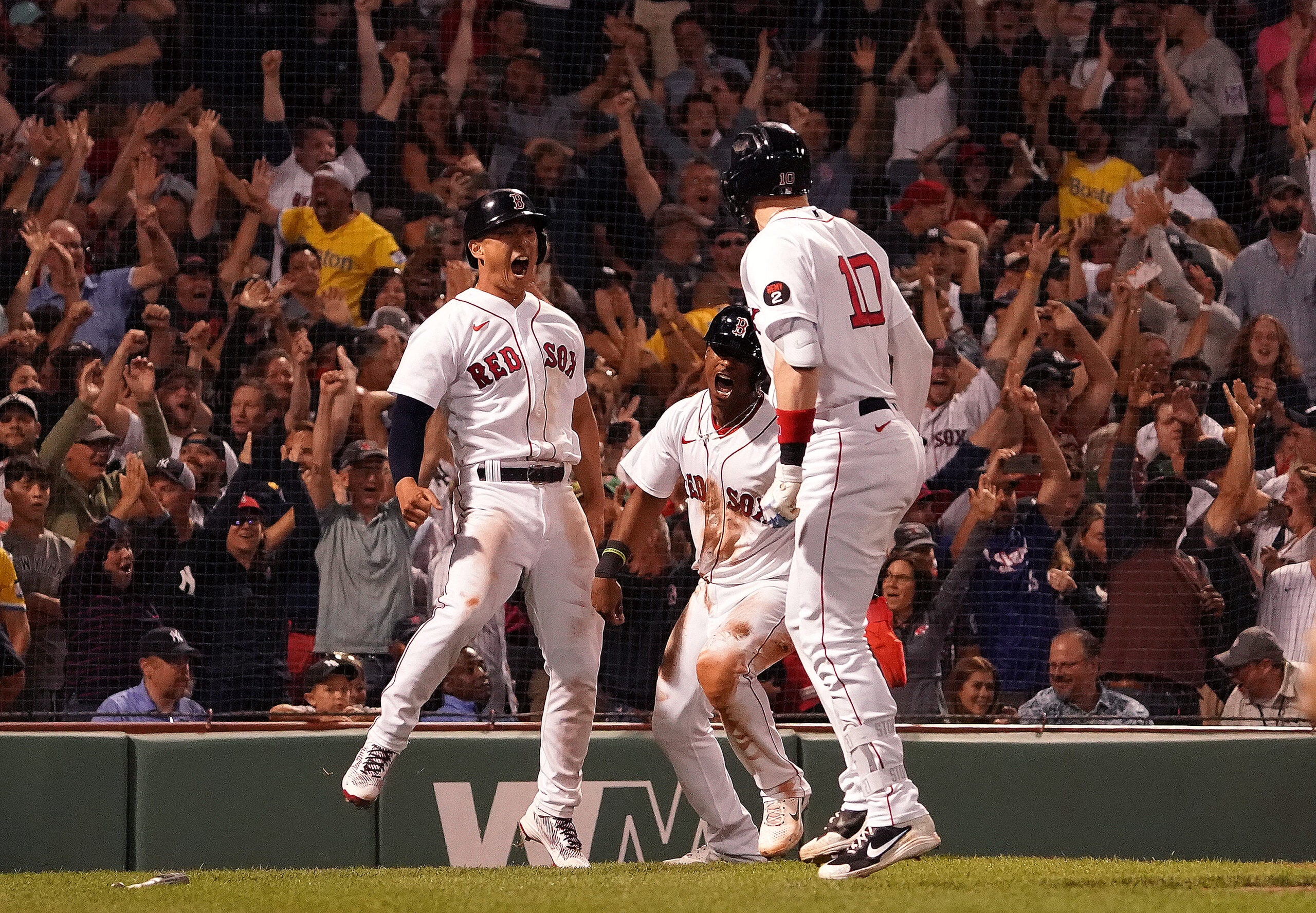 The Red Sox claimed a typically wild win over the Yankees on Saturday, walking off in the bottom of the 10th inning with a 6-5 victory.

Here are the takeaways.

1. Jeter Downs went 0-for-4 in his major-league debut last month before returning to the WooSox. Back in Worcester, Downs started hitting everything — .438/539/1.031 splits with five homers and just six strikeouts, as noted by The Boston Globe’s Alex Speier.

In other words, Downs must have had a wild Saturday. The Red Sox sent out a press release announcing his recall from Worcester at 6:24 pm — a little less than an hour before first pitch. He returned to Boston for a rivalry game against the Yankees. In the eighth inning, he pinch ran for JD Martinez, and Alex Verdugo singled to drive him in — the first run of his major-league career. Two innings later, Downs singled to right to drive in his first RBI, then came around to score the winning run when Alex Verdugo drove him in again.

Per Speier, Downs seems to have made an important fix to his mechanics, which makes his recent tear particularly interesting. On Saturday night, he simply got to enjoy being the Jeter Who Beat the Yankees.

2. A reporter asked Cora if the Red Sox needed a Jeter to beat the Yankees. Cora laughed.

“We needed a Dugie to beat the Yankees,” he said.

Verdugo had a huge night—his single in the eighth drove in the game-tying run, and his two-run single in the 10th helped the Red Sox walk-off despite continued bullpen struggles. The walk-off was the fifth of Verdugo’s career.

“Dugie is swinging the bat well,” Cora said. “He’s staying on pitches. He’s been clutch for us lately and got a good pitch to hit, goes the other way, and then he worked the count to his advantage at the end, and put another great swing. It was a good day for him.”

3. Rob Refsnyder brought the Red Sox within a run in the bottom of the sixth with a monstrous 436-foot homer to left.

In the 10th, Refsnyder hit a lead-off single that sent Jarren Duran to third and got the Red Sox’ offense started.

“It felt like we were putting good at-bats, and it felt like a one-run game when Rob hits the homer,” Cora said. “It’s like, ‘We’re one swing away from tying this.’”

4. The Yankees scored two runs in the top of the 10th, but after Anthony Rizzo doubled in the second run of the inning, Christian Vázquez threw him out trying to steal third for the second out. The Red Sox escaped without further damage.

Cora praised Vazquez for that throw twice in his postgame comments.

“That play by Christian at the end, we were talking about the running game, right?” Cora said. “And Rizzo took a chance late in the game there, and we threw him out, and we struck out Stanton and gave us a chance to win the game. There, we are one swing away from tying the game. So great job by Christian throwing Rizzo out.”

Kevin Plawecki, meanwhile, started the game behind the plate and recorded his first caught-stealing of the season when he threw out Kyle Higashioka on the first steal attempt of his first 183 games.

5. Josh Donaldson hits two opposite extremes at third for the Yankees. In the 10th, he bobbled a grounder by Xander Bogaerts that could have been a game-ending double play. Donaldson still recovered to throw Bogaerts out at first, but the grounder set the table for Verdugo’s walk-off.

That miscue by Donaldson overshadowed an impressive bare-hand earlier in the game.

6. Kutter Crawford pitched well once again — five innings, one run, four hits, six strikeouts and two walks. The lone run was a homer by Aaron Hicks in the top of the fifth.

“He was really good,” Cora said. “Mixed up his pitches, good velocity, good cuter, good breaking ball. He hung a changeup there, but one run, five innings. He’s been solid for us the last two. Very calm against a good-hitting team, worked ahead, and he kind of helped us reset this today. We got a chance tomorrow to split the series.”

7. The Red Sox were without Rafael Devers, who will miss Sunday’s game as well (at least) after he re-aggravated a back injury on Friday. Kiké Hernández, meanwhile, felt tightness in his hip and will not join the team in Tampa Bay or New York this week.

8. The Red Sox and Yankees close this series on Sunday, starting at 7:08 pm

Cora was asked if he thinks Saturday’s win can carry over into the rest of the season.

“It has to carry over at 7:05 tomorrow, that’s the most important thing,” Cora said. “We have Nick [Pivetta] on the mound and they got a good one going. That’s a good baseball team. …

“We have to finish games. We’re one pitch away from finishing games, and we haven’t done that throughout the season. Hopefully today it got us going against a tough opponent.”

Get the latest Boston sports news

Receive updates on your favorite Boston teams, straight from our newsroom to your inbox.