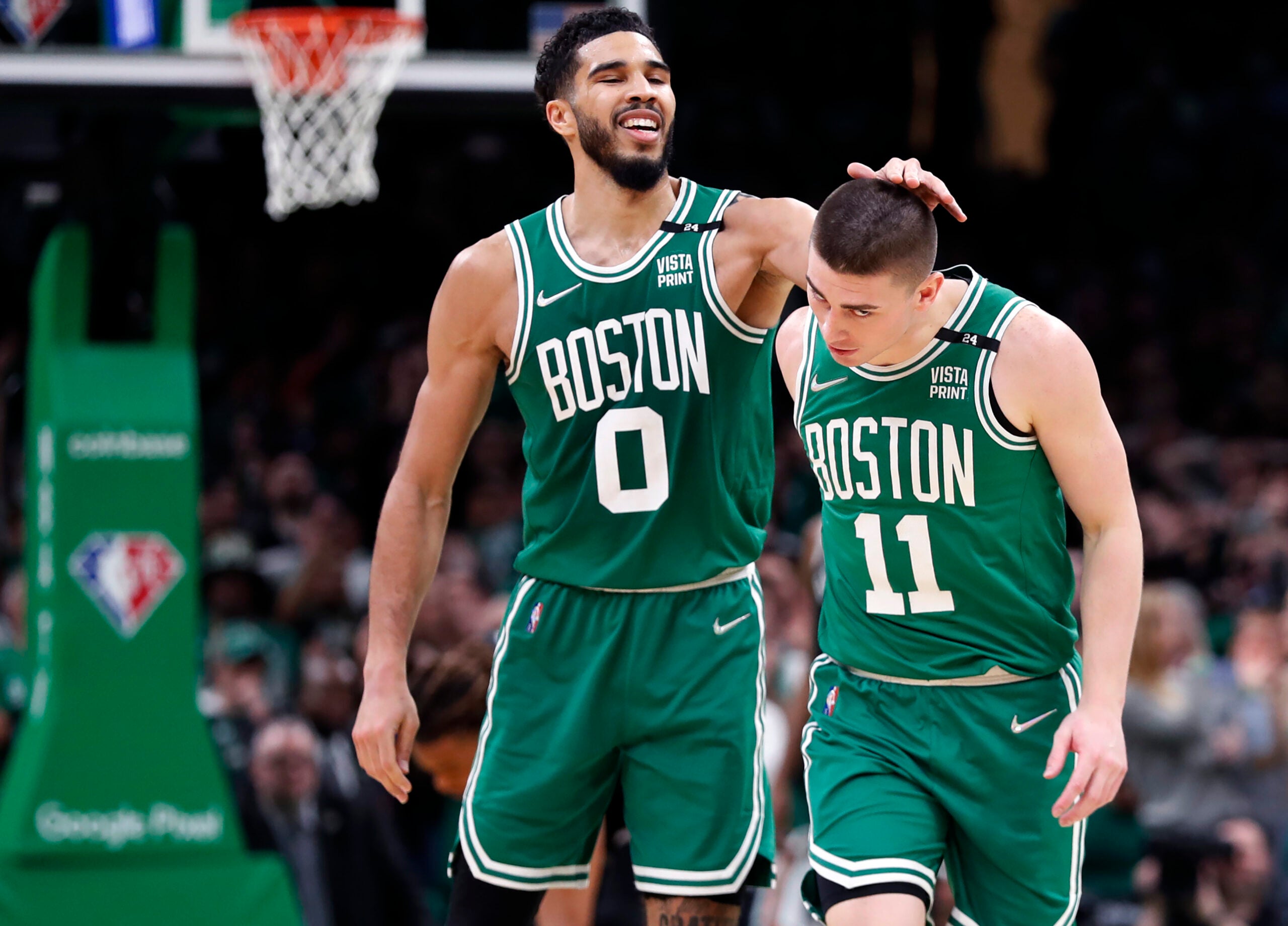 With the Celtics up six late in the fourth quarter of a wild Game 2 against the Nets on Wednesday, Jayson Tatum starred down Goran Dragic and four other Nets who watched him as the shot clock ticked down.

Tatum could have passed to the perimeter, where Grant Williams waved his arms wide open. He could have risked a pass to the corner, where a lightly covered Jaylen Brown could have taken a 3-pointer.

But Tatum — who had been harassed by the Nets all evening and finished 5-for-16 from the floor — very clearly wasn’t giving the ball up in that scenario. He pivoted around and drove at Seth Curry, who inexplicably stopped a step too early. Tatum dropped in a wide-open floater that gave the Celtics an eight-point lead and a stranglehold on Game 2. They pulled away and claimed a 2-0 series lead with a 114-107 win.

“Every game isn’t going to be highlight plays and 40-point nights and things like that,” Tatum said. “This was like an old-fashioned, old-school playoff game.”

The Celtics could have folded a number of times on Wednesday, and for three quarters they looked like they might be headed back to Brooklyn tied 1-1 in the series.

They probably would have fallen behind by 20 in the first half if Grant Williams wasn’t red-hot from 3-point range. Al Horford got into foul trouble late. The Nets grabbed a number of costly offensive rebounds. Seth Curry’s 3-pointer at the start of the fourth quarter felt like it might start an avalanche.

But the Celtics didn’t fold. Their defense clamped down to a degree seemingly unique to them this season. Meanwhile, their offense — led by Jaylen Brown — found a rhythm. In the fourth quarter, Brown buried a 3-pointer, then drove straight into Andre Drummond and finished a brutally difficult layup that tied the game. Payton Pritchard pushed the Celtics in front with a three, then Brown drove straight through Kyrie Irving for a layup. On the next possession, he rattled in a deep triple that pushed the lead to five.

From there, the Celtics traded baskets until Tatum’s floater. A few minutes later, Tatum buried a three that capped a 21-4 run.

The Celtics won the fourth quarter 29-17 and were +17 in the second half. Their highly successful and aesthetically pleasing style of play at the end of the season has sputtered at times in the first two playoff games, but they hold a 2-0 series lead heading back to Brooklyn.

2. The Celtics defended Kevin Durant hyper-aggressively for the second consecutive game and were rewarded once again. All evening, Durant was harassed by the Celtics who clearly were willing to sacrifice some free throws — and some buckets by Bruce Brown — in exchange for making Durant uncomfortable. The results paid off — Durant finished with 27 points but was 4-for-17 from the floor with six turnovers, and he was a staggering 0-for-10 in the second half.

Steve Nash noted the Celtics’ physicality but stopped short of complaining about foul calls. That might be partly because Durant went to the free-throw line 20 times and made 18 of them.

“They’re playing two or three guys on me sometimes when I’m off the ball, mucking up actions when I run off stuff,” Durant said. “I see Horford leaving his man and coming over to hit me sometimes. There’s two or three guys hitting me wherever I go, and that’s just the nature of the beast in the playoffs.”

3. Grant Williams was crucial in the first half, cashing in all three of his 3-point attempts. Williams and Al Horford combined for 23 points on 10 shots in the first two periods and kept the Celtics within striking distance down 10 at the break, which set the stage for their 21-4 run in the fourth quarter.

Then in the second half, Pritchard put together one of his best stretches this season. He crossed over Nic Claxton to start the Celtics’ run after Seth Curry opened the fourth quarter with a 3-pointer, and his step-back triple with 7:45 remaining pushed the Celtics over the hump and gave them a lead.

“Grant, Payton, they were really the heroes of this game,” Brown said. “They played well in stretches that we needed them to play well.”

Williams was asked about his extended role in the postseason after he struggled to catch on in his first two years with the Celtics.

“It’s kind of cool to be able to say from the progression I’ve had in my career — I remember my rookie year, guys used to call me up and kind of isolate against me,” Williams said. “I kind of got better throughout the year.

“It’s just kind of a testament to the growth I’ve had over the years, but also a credit to the team and how we’ve grown.”

4. One of several backbreaking baskets in the fourth quarter by the Celtics was a left-handed bank by Marcus Smart, who walked toward the Celtics bench holding his left hand out as if in disbelief. Brown came running over and grabbed Smart’s hand, pretending to read something on his palm.

“I taught Marcus everything he knows,” Brown said. “I know he’s Defensive Player of the Year, but a lot of that, he learned from me.”

“No, Marcus played great,” he said. “That’s what Marcus does, made some big plays down the stretch and we pulled out another win.”

5. Smart was honored as the Defensive Player of the Year prior to the game. The Celtics dimmed the lights and had ownership present him with the trophy, along with Gary Payton — the last guard to win the award. Smart also showed up to the arena in a boxer’s robe with the letters “DPOY.”

“I was thrilled when he told me he was coming to a game,” Tatum said. “It’s the first game he’s been able to come be able to see me play in person since I left Duke. Obviously, he has a lot of time on his hands but he was great having him here and that’s my guy. It was great having him in the building.”

7. Celtics fans weren’t any more friendly to Irving, but he didn’t give them as much reason to lash out on or off the court — he finished with a quiet 10 points on 4-for-13 shooting.

After the game, Irving heaped praise on Celtics players as well as the organization.

“I just think the timing is right,” Irving said. “Their window is now for these young guys on this team that have matured. They’ve been through series’ together, been through seasons together, they’ve been through battles together. I got a chance to experience some of that, now being on the opposite end and going against a healthy Celtics team — without Robert Williams — but you’re just seeing there’s a difference in their verve, there’s a difference in the way they approach the game. And also they have a set offense and defense that they rely on.

“Ime’s been a huge part of that. But you’ve got to give credit to that guy that’s sitting in the president’s role as well now. All of the sudden, we don’t get to see him as often, Brad Stevens definitely has a lot to do with that.”

Make of those comments what you will.