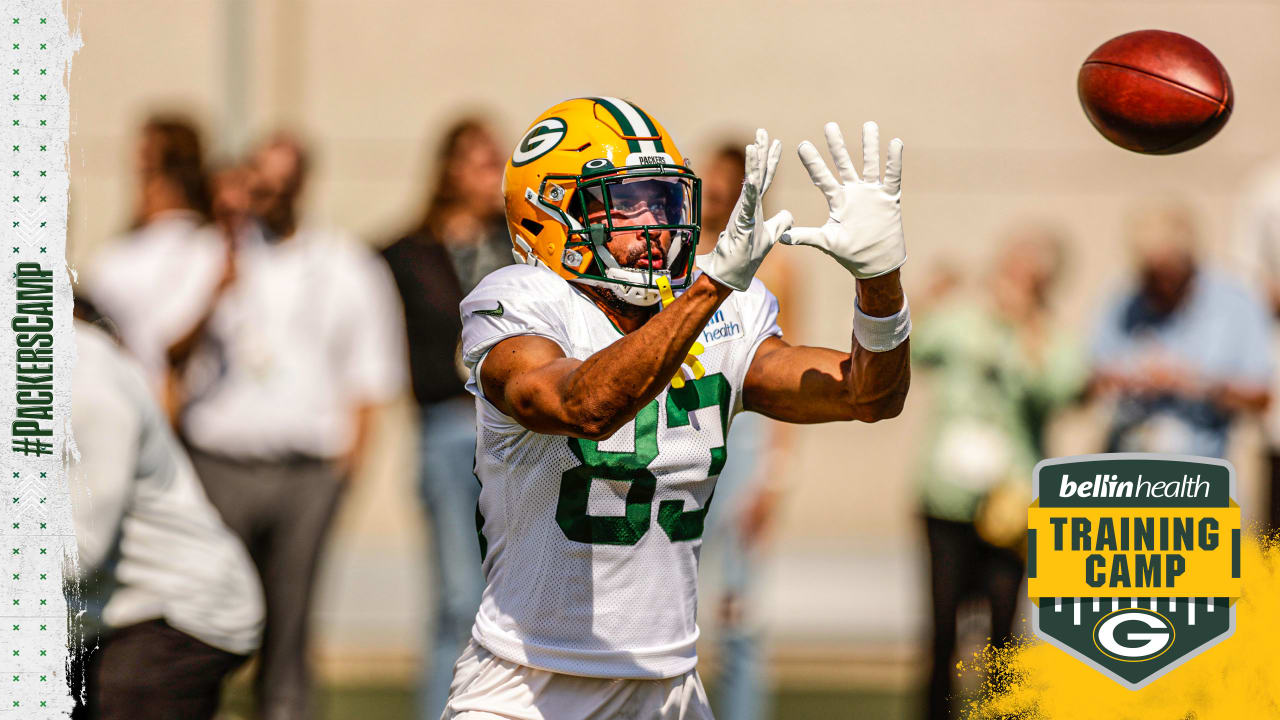 GREEN BAY – The Packers and New Orleans Saints returned to the practice field Wednesday for the second of their two joint practices at Ray Nitschke Field.

Here are five things we learned:

1. The Packers like how their young receivers responded after a meeting with Aaron Rodgers & Co.

Coming off an uneven practice on Tuesday, the Packers’ young receivers started Wednesday with an 8:45 am CT meeting in the quarterbacks room with Green Bay’s three QBs and a few offensive coaches.

Rodgers led much of the discussion, which included some film study and review of recent practice tape. Veteran receivers Allen Lazard and Randall Cobb also chimed in, offering tips on how receivers operate within the offense and insight into what it takes to get on the same page with Rodgers.

The message didn’t differ greatly from what Head Coach Matt LaFleur and the coaching staff have talked about with the rookies in the past, but hearing Rodgers’ perspective directly on everything was enlightening.

“Aaron spoke to us about what he likes or what not just based on concepts or what he sees,” rookie fourth-round pick Romeo Doubs said. “He just wants us to see what he sees, so then that way we can be able to react faster, play faster and just be able to dominate and continue to be who we are.”

Seventh-round pick Samori Toure also was all eyes and ears during the meeting, and responded with the biggest play of Wednesday’s practice when he hauled in a 50-yard touchdown from backup quarterback Jordan Love in a two-minute period with the No. 2 offense near the end of practice.

With the Packers still trailing by one point, there wasn’t time for celebration. After resetting, Love again with Toure on an out route connected near the pylon to complete the two-point conversion and finish the drill in emphatic fashion.

“We definitely took it to heart,” said Toure of the Wednesday morning meeting. “As young receivers who are always looking for ways to get better, when the quarterback tells us to rise to the occasion, that’s what we gotta do.”

It wasn’t the first time the Packers’ quarterbacks and receivers have congregated this summer. Rodgers dropped by the receivers’ room earlier during training camp to help explain different nuances of the offense.

Because as much as individual meetings help in a young player’s development, it’s equally beneficial to have the reigning NFL MVP provide direction on what he’s looking for.

“When you hear it from the guy who’s throwing the ball, it comes out a little bit different,” Cobb said. “It was great to see them respond and make some plays today.”

2. Jordan Love is ready to get back to work on Friday.

For the first time in his NFL career, Love will have the opportunity to play in back-to-back games during Friday’s preseason home game against the Saints.

The former first-round pick started the Packers’ preseason opener against Houston last year but was sidelined the following week against the New York Jets due to a shoulder injury.

Feeling “good” about how he played last Friday against San Francisco, Love hopes to carry the momentum of Wednesday’s two-minute drill into Lambeau Field on Friday night.

“That’s what it is, just being comfortable, being confident right now,” Love said. “It’s just consistent reps, had to get all those two reps right now, got all the reps during OTAs. So yeah, it’s just putting it all together, getting those reps and just going out there and make plays right now.”

It was almost to be expected established veterans such as Rashan Gary, Preston Smith and Kenny Clark would make their presence felt pressing the quarterback this week.

But when it comes to the Packers’ defensive dominance, Enagbare also has been exceedingly disruptive up front.

The fifth-round pick out of South Carolina has been riding a wave of momentum for the past week and earned first-team reps against the Saints.

Enagbare put those to use, challenging for a few more “sacks” while unveiling a wide array of pass-rush moves.

“I feel I had two pretty solid days,” Enagbare said. “Definitely a lot of stuff I can work on, hand placement, stuff like that or being more aggressive on my strike. But overall, pretty good solid days.”