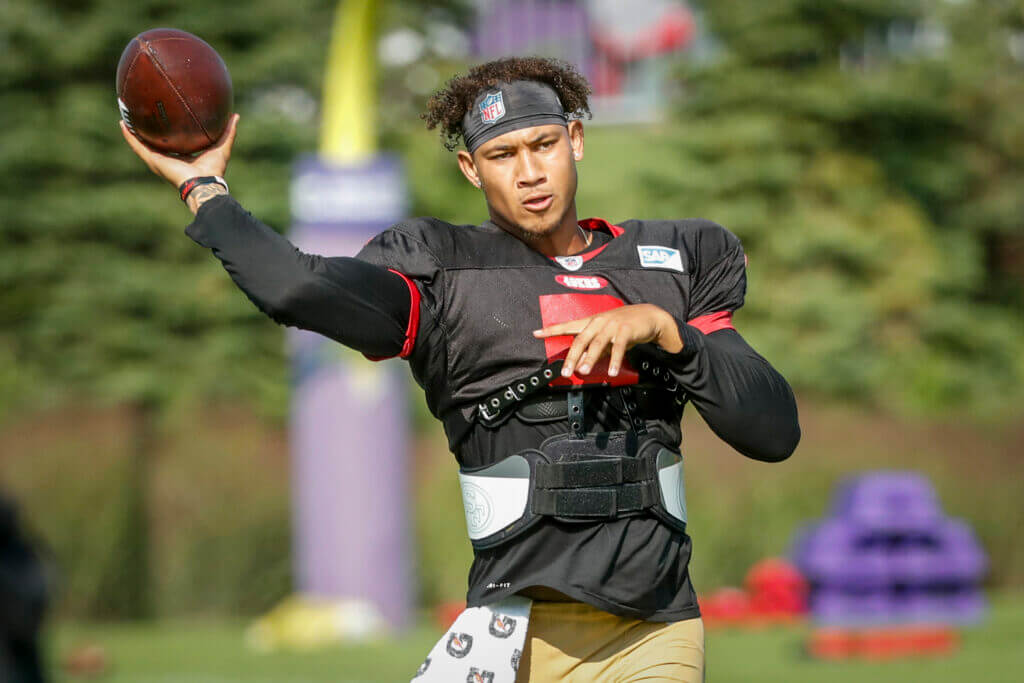 EAGAN, Minn. — When training camp began three weeks ago, the 49ers’ pass catchers said they were eager to see Trey Lance take over the offense because they knew he had the ability to turn broken plays into big gains.

That was Lance’s strength on Wednesday, the first of two practices against Za’Darius Smith, Danielle Hunter, Harrison Smith and the rest of the Vikings defense.

That unit looked like it was about to win the day against Lance and the 49ers’ offense during a two-minute period late in the practice. The Vikings had sacked Lance—one of four in the practice—early in the sequence, which led to a fourth-and-long scenario with a little more than 30 seconds remaining. Once again, Lance was flushed from the pocket. But as he rolled to his right, he continued to search down the field and eventually saw Deebo Samuel break free in the middle.

The two connected and two plays later Lance spiked the ball to set up a would-be short field for Robbie Gould.

“It was a three-man rush, fourth-and-long, I just scrambled out to my right,” Lance said. “Deebo did a great job. … He’s done a great job off schedule for us, along with Jauan (Jennings) and BA (Brandon Aiyuk), but Deebo showed up today.”

The 49ers quarterback may have been on an opponent’s field Wednesday, but he was still a center of attention.

Lance is a Minnesota native, after all, so plenty of local reporters were curious about how he was faring. Another reporter made the 3 1/2-hour drive from Fargo, ND, to check in on the former North Dakota State star. Lance’s parents were among the onlookers and on Thursday, Marshall High’s football team will take a 2 1/2-hour bus ride to watch Lance, a Marshall graduate, in action.

On Wednesday, he looked a lot like he had in recent practices in Santa Clara, Calif. The offensive line crumbled around him at times, especially later in the practice. He missed Samuel on a potentially big play midway through the session. During a red-zone drill, George Kittle broke free and raised his hand to signal he was open but then couldn’t catch up to Lance’s overthrown pass. Overall, Lance was 11-of-18 in team situations with no interceptions.

“We’re in the middle of camp, so some good, some bad,” Kyle Shanahan said of the quarterback. “But he’s getting better throughout the process.”

It’s clear he needs to be smoother and more accurate on some of his shorter throws.

Early in practice, for example, he hit Samuel on a short pass out of the backfield. The receiver, however, had to reach behind him to catch the pass, slowing him down on a play designed to send him across the line of scrimmage with plenty of momentum.

Asked about Lance’s short game, Kittle hesitated before saying, “Oh, I think there’s been a lot of hits and there’s been some misses. I mean, it’s nothing I’m worried about.”

Kittle emphasized that aspect of Lance’s game is a lot better than it was when the quarterback first arrived last year.

“One of my first 5-yard routes (with him), he threw it at my head and tried to take my helmet off,” he recalled. “Now he’s showing some nice touch. He’s gotten so much better than when he first got here and he’s going to continue to improve.”

That’s certainly been the case during move-the-ball sequences like the one that ended practice. As a rookie last summer, Lance looked good during scripted periods — with Shanahan instructing him through the radio receiver in his helmet — but completed only 48.6 percent of his passes when he was on his own and trying to move the offense down the field.

This year his completion percentage in move-the-ball scenarios is 67 percent. He’s also been sharpening his connection with Samuel, who wasn’t available early in camp while his new contract was being hashed out. While Aiyuk was Lance’s favorite target at that point, he’s connected with Samuel a lot over the last three practices and hit him five times on Wednesday.

Are they heating up?

“Yeah, I felt like we’re always hot,” Lance said with a smile. “He’s done a great job the last few days. The more reps, the more we get to watch stuff together.”

• The only interception a 49ers quarterback threw came when cornerback Parry Nickerson broke on a sideline throw from Brock Purdy to Ray-Ray McCloud and grabbed the ball at the pylon. Purdy struggled on Wednesday, especially early in the session, and finished 3-of-8 in team situations.

Nate Sudfeld had what’s come to be a typical practice for him in that he mostly threw shorts, efficient passes to running backs and tight ends. He began 6-of-6 in team situations and finished 11-of-14. Like Lance, one of his incompletions included a spike during a two-minute session.

• The 49ers don’t spend a lot of time in seven-on-seven situations (no linemen) when they practice among themselves, but they had a full period doing that against the Vikings. Lance looked sharp in the drill, which is what you’d expect when there are no defensive linemen collapsing on him.

His highlight was a perfectly placed deep ball to speedster Danny Gray, who beat veteran cornerback Patrick Peterson on the play. He also had nice completions to Samuel and Jennings in traffic. Jennings had a couple of conspicuous drops in recent practices, but he was sure-handed on two contested throws on Wednesday.

Trey Lance goes deep to — who else? — Danny Gray during 7-on-7 drills. They beat Patrick Peterson on the play. pic.twitter.com/axnv0THDF7

• On the first play of one-on-one pass-rush drills, Trent Williams knocked down Za’Darius Smith while 20 yards away Javon Kinlaw planted a Vikings interior offensive lineman on his pass rush. Smith, however, got his revenge later in the drill when he blew past backup tackle Justin Skule, causing Skule to slip and go to the ground. He also had at least one sack of Lance in 11-on-11 situations after beating right tackle Colton McKivitz.

Both Drake Jackson and fellow rookie Kevin Atkins had nice pass rushes against Vikings backup guard Wyatt Davis. Jackson, who takes a handful of inside snaps per practice, first stepped right, then powered to his left to get Davis off balance and blow past him.

Tarvarius Moore continued to fill in for Jimmie Ward with the first-team defense. Trey Sermon took the bulk of the first-team repetitions at running back with Mitchell missing.

• On the defensive side, the 49ers backup cornerbacks struggled against Justin Jefferson and the Vikings’ top wideouts. However, safety George Odum intercepted Vikings quarterback Kirk Cousins ​​on a throw to running back Dalvin Cook. It was the defense’s 18th interception since the start of training camp. The unit had 11 picks last summer and didn’t intercept Justin Herbert during two joint-practice sessions with the Chargers.

• Asked if anyone stood out to him in Friday’s win over the Packers, Nick Bosa cited fellow defensive end Kemoko Turay, whose 46 snaps were more than any 49ers defensive lineman and who finished with four tackles, also a game high among the linemen.

“I actually was flipping through the channel in our hotel room and our game was on, and he popped off on the TV copy definitely,” Bosa said. “I think he’s shown he plays our style of football and that he’s a game player. Not that he doesn’t show up in practice, but when the lights come on he shows up even more. It’s something you can’t really teach and he’s got that.”

• Defensive tackle Hassan Ridgeway is back to practicing in full after recovering from the quadriceps strain he suffered early in camp. Ridgeway is the team’s dedicated run stuffer, a role that DJ Jones — who’s now with the Broncos — filled in recent seasons.

“He looks as good as he looked in the beginning of camp,” Bosa said of Ridgeway. “And he’s going to be a really important piece since we lost DJ”

• Wednesday’s sessions may have been the most congenial in the history of joint practices. There wasn’t so much as a hint of anger and there were no fights, which are typical when two teams get together.

Shanahan said he spoke with his Vikings counterpart, Kevin O’Connell, before practice.

“If anyone throws a punch, we’re going to kick them out of practice,” he said of their agreement. “We all know how important it is to get this practice work right now, and that’s what we stress.”

• When it comes to NFL practice facilities, two stand out among the rest: The Cowboys’ opulent compound in Frisco, Texas, and the Vikings’ facility, which boasts its own stadium, a museum, a hotel and four, full-length grass fields that had the 49ers players and staff impressed on Wednesday. Back in Santa Clara, the 49ers have two grass fields, neither of which is 100 yards long.

“Oh my gosh, it’s wonderful,” Kittle said after practice. “I did my combine training in Frisco, so I got to be around the Dallas Cowboys (facility). I lived across the street from it. Seeing that and then coming to see this, it’s awesome.”

The lay of the land at the Vikings’ sprawling facility… pic.twitter.com/tjYEjBJOwk

• What have the 49ers been doing for fun? Walking through the Mall of America, which is attached to their hotel.

“I got my steps in — my watch said I had to get my steps (on Tuesday),” Kittle said. “It’s a good way to interact with the guys. … Being able to do group stuff is just really fun. You get to hang out with guys you might not hang out with usually. So I might be sitting with the D-line for one dinner and the DBs the next dinner.”

• Mike Shanahan was the offensive coordinator at the University of Minnesota in 1979, which means Kyle Shanahan was born in Minneapolis. How old was he when the family moved out? About 14 days, Kyle said.

“I don’t have any memories except I had a Minnesota social security number,” he said.