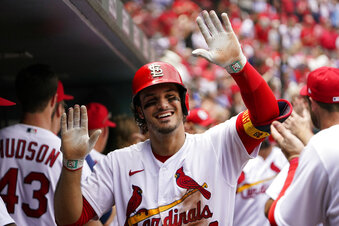 ST. LOUIS – Four Cardinals were named to the National League All-Star Team on Sunday afternoon. The announcement came shortly after the Cardinals posted a 4-3 victory over the Philadelphia Phillies at Busch Stadium.

First baseman Paul Goldschmidt will make his first appearance in the Midsummer Classic as a Cardinal. He’d been to six consecutive All-Star Games with the Arizona Diamondbacks from 2013 to 2018. Goldschmidt is currently batting .340 with an on-base percentage of .423 and a .610 slugging percentage. He leads the National League in runs (61) and hits (107).

Nolan Arenado was named to his seventh-consecutive All-Star roster. The Cardinals third basemen finished second in player voting behind Manny Machado of the San Diego Padres. The nine-time Gold Glove recipient is on pace for 180 hits, 107 RBI, and 33 home runs.

Reliever Ryan Helsley was named for his first All-Star Game via the player ballot. At present, he has a 5-1 record and 54 strikeouts in 36 innings pitched, along with a 0.75 ERA and 0.694 WHIP.

And finally, we come to no. 5. Albert Pujols was named as a legacy pick to the All-Star Game in his final year before retirement. It is Pujols’ first All-Star appearance with the Cardinals since 2010 and first since 2015 with the Los Angeles Angels of Anaheim.

As part of the latest collective bargaining agreement finalized in March, there is a clause that allows MLB Commissioner Rob Manfred to add one player per league to the All-Star Game on the basis of their career achievements. Hey ultimately thing Pujols for the National League and Miguel Cabrera of the Detroit Tigers for the American League.

The 2022 MLB All-Star Game is set for Tuesday, July 19, at Dodger Stadium in Los Angeles.