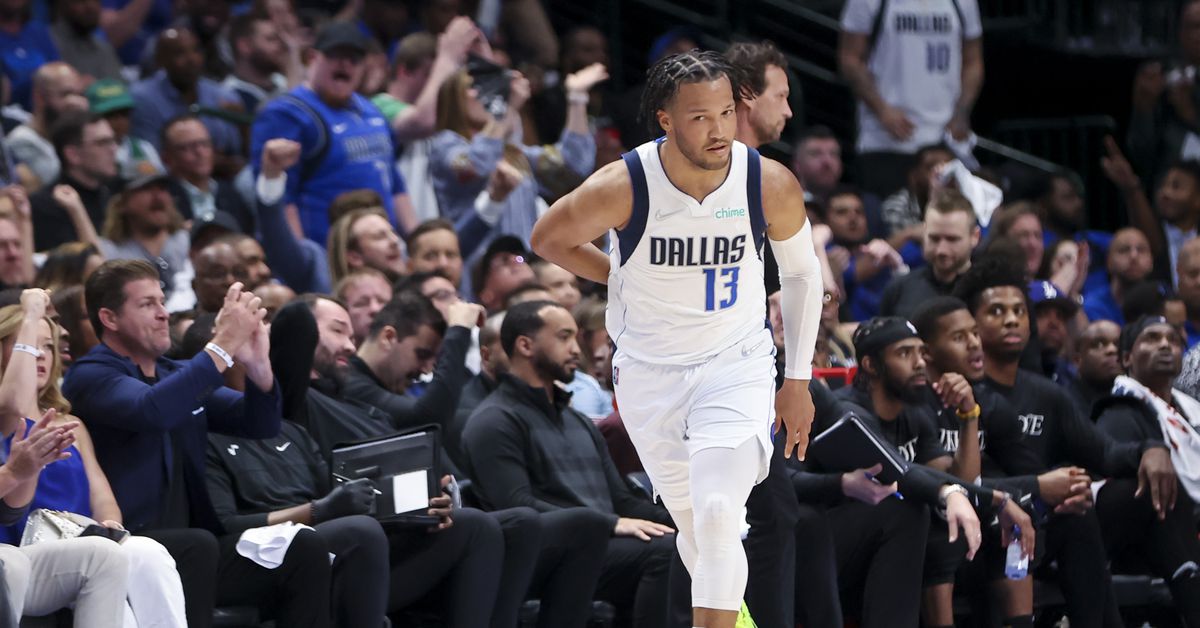 The Dallas Mavericks defeated the Utah Jazz 110-104 Monday night in a barnburner in Dallas. The win evens the series at one game a piece. The Mavericks will head to Utah on Thursday for Game 3.

The Mavericks started off the game with strong defense again, but much like Game 1, couldn’t generate much offense. Worse, they closed quarters badly. The Jazz outscored the Mavericks 17-8 in the final three minutes of the first and second quarters.

But Dallas continued to fight in the third quarter. They kept closing on the Jazz, but just couldn’t pull ahead for a lead until a Maxi Kleber 3-pointer late in the quarter. Jalen Brunson was especially key at keeping the Mavericks in the game, scoring 10 points in the third quarter. He finished with a career-high 41 for the game.

Utah pulled ahead before the fourth quarter started on yet another late quarter run of 8-3, but the Mavericks were playing with confidence. And then they started making three’s. Everyone. Kleber and Brunson and Dorian Finney-Smith and Bullock. From everywhere.

At this point I blacked out and have no other analysis for you other than what a win by a group of guys who earned every single point they scored. I can’t remember a win like this since the 2014 Vince Carter buzzer beater against the Spurs.

One thing that stands out is the gritty rebounding effort by the whole team. The box score will tell you the Mavericks got crushed on the boards, and they did. But they bounded the Jazz 8-6 in the fourth quarter. Rudy Gobert dominated the glass until he didn’t, until it mattered most.

There is hope. Here are three things from the game:

Whatever your lofty expectations were for Brunson this season, surely they weren’t this high. I have been the leader of the Jalen Brunson hype train for years and I didn’t think something like this was possible. But here we are.

41 points, eight rebounds, and five assists. Two steals. 6-of-10 from behind the arc. Plus-15 for the game. Zero turnover. What a line. In a game the Mavericks needed badly, Brunson had the game of his life. This is one of those performances we’ll remember forever. It’s in the Mavericks’ franchise playoff highlight reel. Brunson scored in every possible way. Look at his shot chart:

There’s not enough words for a performance like this. People say someone is clutch when they hit a tough shot at the end of the game. But a game like this? That is clutch. When your team needs a big game or the season is in jeopardy, and you play the game of your life? Special players do that.

Maxi Kleber got his swagger back

Speaking of coming up big when your team needs it the most, Kleber finally broke out of a month-long shooting slump and scored 25 points on 8-of-11 shooting from deep. And those points were timely, too. Kleber scored 19 points in the second half, and 10 in the fourth quarter.

He almost doubled his previous playoff career high in points, which was 14 points against the Los Angeles Clippers in last year’s postseason. Kleber chose the best time to come out of his shell, because the Mavericks desperately need his shooting.

Kleber’s 3-point shooting drew Rudy Gobert out of the paint and cleared the lane for Brunson and Spencer Dinwiddie. That opened up even more 3-point shooting for players like Finney-Smith and Bullock. It’s scary to think, but Kleber’s shooting is key to a Dallas victory. Hopefully he’s on the verge of getting hot for the whole series.

The Mavericks’ rained down 3-pointers in the second half. They set a franchise record for 3-pointers in a playoff game with 22, breaking the previous record of 20, set twice before. They hit six in the corners, and 16 above the break.

Dallas shot 46% from behind the arc on a high volume of shots (22-of-47). It’s tough to beat a team that hits so many 3-pointers unless you’re hitting them at a similar rate. The Jazz were not. It may not be a repeatable strategy, but it enabled the Mavericks to steal a win, and every game they extend this series increases the likelihood we see Luka Doncic play. And if he can get in the game, anything can happen.

Here’s our latest episode of Mavs Moneyball After Dark. If you’re unable to see the embed below, click here to be taken to the podcast directly. Or go to your favorite podcast app and search Mavs Moneyball Podcast.