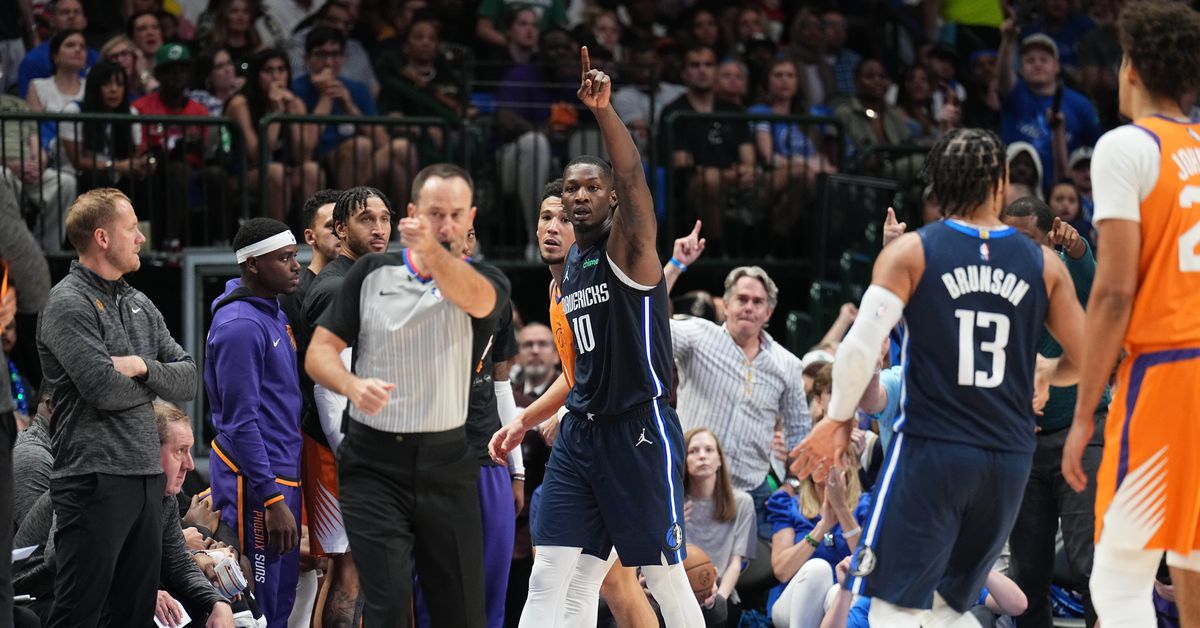 The Dallas Mavericks tied the Western Conference Semifinals 2-2, following a 111-101 win in Game 4 over the Phoenix Suns Sunday afternoon. Luka Doncic led Dallas with 26 points, seven rebounds and 11 assists. Devin Booker was the high point man for Phoenix with 35 points.

The two teams traded baskets to open things until Luka Doncic picked up his first technical crowd of the postseason, arguing a call for a possession and a half after the play. But the Suns couldn’t capitalize on the lack of Dallas focus, and the Mavericks hit back to back threes to give them a 13-8 lead, forcing a Suns timeout. Things remained extremely chippy throughout the frame with both teams picking up fouls from their superstars (Doncic and Chris Paul each got two). Hot three point shooting paces the Mavericks as they hit eight in the quarter, and they led after one 37-25.

Davis Bertans and Spencer Dinwiddie helped grind the light up to 17 points before a pair of Jae Crowder threes cut the Dallas lead back down to 11. Despite winning most of the non-Doncic minutes, Brunson and the bench lost a lot of momentum in the middle of the quarter and Phoenix cut the lead down to eight following a Dwight Powell technical foul. Once Doncic re-entered the game, the two teams continued to trade baskets with the Mavericks inching back ahead in the 8-11 point range. Luka got fouled a ton down the stretch, including drawing Chris Paul’s fourth foul, and his free throws helped carry Dallas to a 68-56 halftime lead.

The Mavericks came out with ugly offense to start the second half while fouling a lot on defense and the Suns quickly cut the lead down. But Chris Paul, wildly, picked up his fifth foul on an offensive call as he tried to draw a foul on Jalen Brunson following a Brunson turnover. Dallas managed to stay ahead by 5-10 points, but it often felt as if they were holding on more than playing to close out the game. Frank Ntilikina connected on a big three at the of the quarter and the Mavericks led going into the fourth, up 87-78.

The final frame was a grind-it-out affair, with even more calls including Chris Paul’s six foul. Phoenix worked the Dallas lead down to six points, trailing 89-83 and the Mavericks called a timeout. The Mavericks had scored just two points in five minutes of offense and Jason Kidd called a timeout with 7:12 remaining. Dallas scored 8 straight points to take a 97-83 lead with six minutes left. From there, it was about the Mavericks holding on. Though the Suns started scoring, the Mavericks had an answer nearly ever possession. Dallas won 111-101 and ties up the series 2-2. The series heads back to Phoenix Tuesday night.

Dorian Finney-Smith and the role players came through big time

The non-Luka Doncic and Jalen Brunson Dallas Mavericks were a scorching 18 of 31 from three point range against the Suns. Though Finney-Smith had a very good Game 3, this Game 4 performance was of the type that Dallas fans understood would have to happen if the Mavericks were to make any noise in this series. And through four games, the role players have been quite loud.

Finney-Smith’s 24 points and eight rebounds were wildly important as the Mavericks kept the Suns at bay. Davis Bertans had the kind of game we’d all been wondering about, hitting four three pointers to keep Dallas ahead with Doncic on the bench. Heck, even the French Prince got in the action with a momentum halting three to start the fourth. With Doncic and Brunson giving Dallas a mixed bag at times, these performances helped carry the day.

These two games in Dallas seem to have shook Phoenix from the calm, cool, and collected state they’ve lived in for most of the year. They’ve never lost a game this season coming into the fourth, so the Dallas solution has been to beat them heading into the fourth.

There are a number of things in play there, beyond the shooting. One of them is the crowd, which has been incredible, and that is giving Dallas a real home court advantage. And, despite the fouls being 25-21 with the Suns committing four more, it’s reasonable to say that a lot of calls went the way of Dallas at times that were very beneficial. Luka Doncic’s early lobbying (note extreme sarcasm) somehow didn’t burn Dallas and he marched to the free throw line to end the second quarter. That lack of friendly whistle very much put the Suns off their game and the Mavericks took advantage.

Dallas has no pressure, not really. They’re the fourth seed playing a team that won 64 games and no one gave them a chance. Now that they’ve got the Suns off kilter, it’s time to knock them off their feet in Game 5.

Luka Doncic can be unstoppable

Doncic took 10 threes tonight and hit 1. He lowered his career playoff three point shooting percentage from 38.8% to 37.2% in a single game, which is really impressive. And yet, the Mavericks nearly ending the thing in the third quarter because of Luka Doncic’s continued attacking and getting the entire Suns team into foul trouble, heck Chris Paul fouled out for just the fourth time ever.

In Game 5, he’ll either hit 7 of 10 from three or won’t shoot any at all and he’ll dominate on the passing and driving. Doncic controlled elements of the game with his driving, between foul drawing and passing to corners. There’s nothing he can’t do at this point, past beat himself when he occasionally ranges into too-emotional territory. And yet we’ll take it every time. What an incredible basketball player. Even when he’s not his best, he’s still amazing.

Here’s our latest episode of Mavs Moneyball After Dark. If you’re unable to see the embed below, click here to be taken to the podcast directly. Or go to your favorite podcast app and search Mavs Moneyball Podcast.